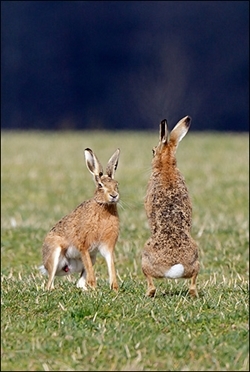 We have changed the game management system at Loddington over the life of the project to record the responses in wild gamebirds, brown hares and songbirds. 1992 was a baseline year in which we recorded what was present, but made no changes. In 1993, we introduced a game management system including habitat creation and management, legal predator control, and winter feeding, in an attempt to increase numbers of wild pheasant and partridges on the farm.

From 2001, we stopped the predator control in order to assess the response of both game and non-game species, and from 2006, we also stopped provision of supplementary food in winter. From 2011, we started a new shoot based on the release of reared pheasants. From 2015, as a result of our research findings, we have carried out control of predators specifically to benefit some songbird species.

Changes in numbers of wild gamebirds, hares and songbirds in response to these changes in management are presented in the graphs below.